Damp and lots of important numbers 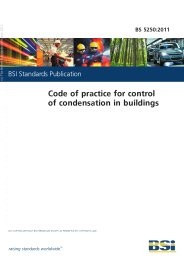 At present the Standard BS 5250:2011 is used almost exclusively as the sole test of moisture risk for buildings. This Standard provides advice on the avoidance of internal surface and interstitial condensation caused by the movement of water vapour by diffusion through the building envelop from the interior to the exterior.

BS 5250:2011 refers to BS EN 13788:2002 as the means by which this risk should be calculated using a method commonly known as the Glaser Method which uses vapour pressure differential and temperature conditions to predict occurrences of condensation occurring either within or on the interior surface of building fabric.

So far it all sounds OK – lots of numbers and big scientific words; surely we can trust British Standards?

BS EN  13788:2002 is clear about its limitations and states “This standard deals with critical surface humidity and interstitial condensation, and does not cover other aspects of moisture, e.g. ground water, precipitation, built-in moisture and moisture convection, which can be considered in the design of a building component” (p. 3). And BS 5250:2011 is clear that designers need to also consider “the much greater risk of condensation occurring as a result of air leakage, which transports water vapour through gaps, joints and cracks in the building fabric” (p. 5) as well as the effects of exposure to sunlight, clear night skies, wind and driving rain, particularly in exposed positions subject to high wind speeds.

Whoops, so nothing in the standard about water as a liquid, faults in the walls, wind driven rain, cold nights, sunshine and rising damp!

Also BS 5250 & BS EN 13788 only assess the movement of water (as vapour) in one direction,
from the interior to the exterior, the use of this standard to assess retrofit solutions commonly advises the use of a vapour control layer in combination with insulation to limit and slow the quantity of vapour from the internal space that can be admitted into the building fabric. However, what about water getting in from the outside?

In Wales this is particularly important as it has been known for us to experience wind and rain at the same time.

The answer is that water coing from outside to in, is just not taken into account. The vapour control layer helps to stop movement of water, but this means that it helps to trap water in the outer layer of the wall. This build up of moisture in the external side of a solid wall can cause a
number of major problems like rot in joist ends. Not good!

Virtually all the well known Internal and External Wall Insulation products have been tested using BS 5250:2011. No wonder they all pass the tests and are ‘recommended’ for use on solid walled buildings. The whole testing regime is not fit for purpose. A major problem one thinks.

There is an alternative standard available to assess moisture risk in buildings, BS EN 15026:2007
Hygrothermal performance of building components and building elements. Assessment of  moisture transfer by numerical simulation. Unfortunately this is not widely used as there is too much vested interest in the status quo.

So, who cares if the products used in refurbishing solid walled buildings are inappropriate?

The companies making and supplying products made to BS 5250:2011? One thinks not.

Probably only you and the people who will live in the house in the future. But does the average person know the difference between BS 5250:2011 and BS EN 15026:2007 and how this applied to products????

The movement of moisture in a house is really important and we should be using the best tests that we can to ensure that we use appropriate materials, but unless tests and knowledge change we shall be left with using products that are ‘recommended’ and ‘comply to British Standards’ but that are, in the real world with water, not fit for purpose. This of course will not happen overnight nor without a fight from the big boys in the construction industry, so it is up to you to demand suitable materials both for the health of your home and your family.

Please share this and other posts with friends who live in solid wall homes.